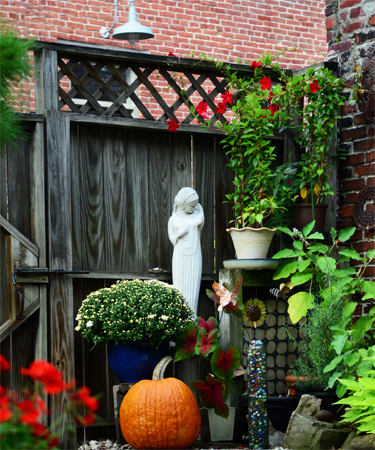 summertime is falling down and winter is closing in

It’s hard to believe that tomorrow is October 1st.

When I came back from Italy, I cleaned up the back-yard; got rid of the sunflowers and the begonias that had wilted replacing them with autumn mums, yellow dahlias and a huge pumpkin. Also, the basil had gone to seed so I cut it. And after six months, I managed to get rid of the fig-tree stumps. It took blunting the teeth of my chain-saw, but after a lot of work, I was able to pull out both sets of stumps.
(The stumps of the original plant took three days of digging and cutting before I got them out.)

I’m having a hard time identifying the transition point into the season. Don’t know if it’s that I was away most of September and therefore didn’t have the time to watch fall slipping in. Many of the trees have turned, but those too seem to just be there; I never got to see the gradual change that is Indian Summer. The forecast is for colder weather later this week, that may be the tipping point.

So far the only indicator of a changing season is the light. Gone is the harsh light of August and the back-yard is ofter bathed in shadows; the sun’s rays are diffused; Apollo’s chariot is no longer over-head.