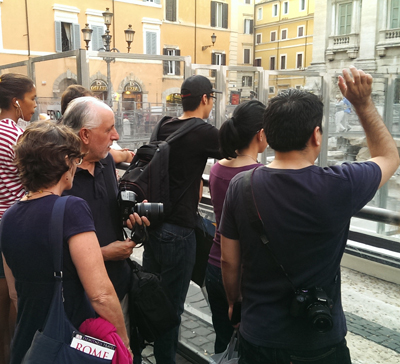 After the morning and the mob at the Vatican, we went back to Trastevere, rested and made plans for the afternoon. The goal was to head north to the La Piazza del Popolo and then walk back downhill to our apartment. We took the subway up to Piazza del Popolo and then began our walk back. Via del Babuino the straightest path to the Spanish Steps, is the modern Via Veneto.

In the 1970’s the Via Veneto was the most famous street in the city. It was the place to see and be seen. There’s a plaque to Fellini on the street. 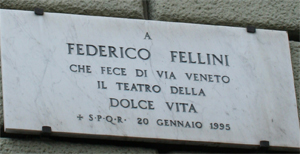 It reads To Federico Fellini who made the Via Veneto that stage for La Dolce Vita But today it’s a memory of its former self and it has been replaced by the Via del Babuino. The Babuino is being repaved and made into a pedestrian road.

After the street with all the high-end designers and the Spanish Steps we walked down to La Fontana di Trevi. The fountain is being rehabbed and the work is being paid by Fendi. There’s no water in the basin or spouting from its statues, but there is a walkway over the basin and a small pool to throw your coins into. Sarah and I threw our coins.

This was my first experience with a potential pick-pocketer/crook. Sarah and I were standing there getting ready to throw our coins in and he suggested that he could take our pic. Now he had a camera, but all my senses were in hyper alert. He was perfect – his own camera in hand, Asian, soft spoken. I could be mistaken, but it felt creepy and the area is famous for pick-pocketers and crooks. (He was in the original pic, standing right behind Sarah; I cropped him out.)