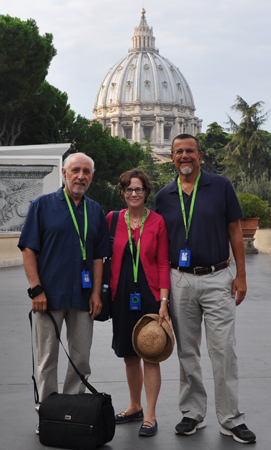 This morning we went to the Vatican for a guided tour. As part of the package, we got in before the mobs and were able to be in the Sistine Chapel with a smaller group.

The guide first brought us out to a huge balcony and she was willing to take pics. (The pic is altered. There were several people behind us, but after dealing with the mob in the galleries, I wanted to pretend that there was a minute when we were on our own, so I Photoshopped the other tourists out. Also, we are wearing the ubiquitous head-sets that tourist-groups wear around their necks. All over the city, tourist groups are led around by a guide that talks to them through the head-sets.)

I don’t think anyone will understand the vast number of people that are allowed into the Vatican Museum at any given point. There were times throughout the tour when the long hall in front of us and the long hall behind us were filled with tourists. As far as you could see in front of you and and far back as you could see was all tourists. At one point we got to look out onto Bernini’s colonnaded square just to see the line waiting to go into the Basilica. It circled the entire square. These were people in line just to get into the church and the tour-guide said it would be a 4 hour wait to reach the front of the line and get into the church.

Because of the mobs, the tour-guide concentrated on the Michelangelo works, the Rafael frescoes and the Basilica. We raced by Dali and Chagall paintings; we ran through a room full of Matisse drawings and tapestries. I never got to shoot the Laocoön. I saw it as we rushed to get ahead of the mob.