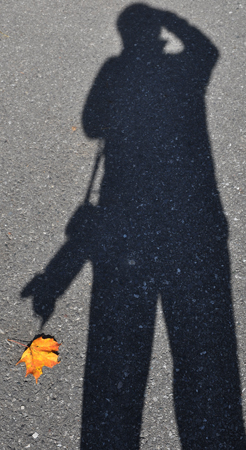 Last week in Toronto was wonderful. The sun was out and the fall colors were brilliant. The trees is Oakville were red and orange. The image on the left is way east in Durham/Pickering. I went walking the Rouge Park and shot a shadow image. In the preview, I saw the leaf and set up the image so that the yellow maple was in the bottom left.

I spent most of Thursday with my old childhood friend and we had a great time. My favorite catch-up story was him telling about having beaten a bunch of anglo-crazed Torontonians who showed up at a property abatement hearing where my friend the architect was proposing street-name changes. He was proposing changing the anglicized names to more modern neutral names. The haughty Torontonians insisted that the name changes would rip the fabric of the community. My buddy showed up with lawyers and with briefs. The anglo-crazies showed up with their attitude toward the ingrate, dark-skinned Calabrese. He beat them; the judge ruled to let him change the street-names. (Nothing like finding a fellow anglo-hater.)

The second great discovery was that my second cousin lives in this beautiful arts-and-crafts house and that she is continuing the Zinga family tradition of portrait painting. Gina has done some beautiful work. My favorite is the face of an old woman she photographed while in Calabria and then made into a portrait. She also has two paintings from our uncle Dimitri; one is a landscape and the other is a portrait of her grandfather, my great-grandfather.