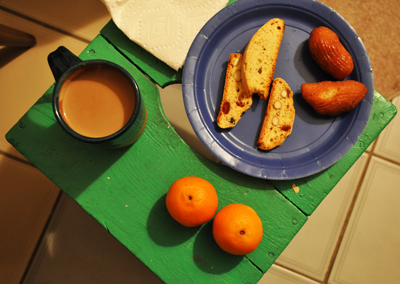 The trip up had a scary part and a non-scary part. I left Rose-and-Derrick’s around 9:00. As I was packing up I realized their front steps were very icy and I had to be careful, but the outside temp wasn’t above freezing, so I didn’t worry. Was I wrong. Going up Michigan 24 there was snow everywhere and in a few spots there was a white-out. What the … I get on 69 West and start seeing all these cars in the median. The whole time I’ve driving there’s been a steady drizzle, but again the temp was above freezing. Next came the fender-benders and the highway patrols. 69 West and 475 through Flint were littered with accidents and police cars.

As I near the exit onto 75 North, I’ve already decided that if the drizzle continues, I’m pulling over checking into some motel and waiting out the weather. I get close to 75-N exit and traffic is at a stand-still. Luckily, the exit lane is moving. Up ahead I see ambulances and flashing lights. However, as soon as I turn onto 75-N, the drizzles gets down to a few drops, the road-bed is dry and traffic is moving fine.

I was able to make up the lost time and still got to my parents’ in 5 hours.

The challenge at this time of year is – how many times can I say no and not offend everyone? My parents seem to think that I should eat-and-eat-and-eat. My dad, who gets up even earlier than me, was pushing polpette at six in the morning. When I told him they weren’t breakfast food, he just waited a longer block before offering the meatballs again. And every time company comes over, it’s another occasion for the prodigal to again reject his heritage and not drink wine or eat large amounts. If I ate everything they want me to eat, I’d be huge as a house and then I’d get criticized for having no self-control.