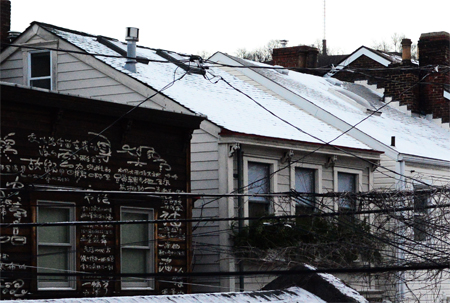 It has been a crazy three days. Saturday morning the roads were a sheet of ice. It started to rain around 6:00 and for the next three hours driving was at your own risk. Sunday the temperature went up to 60 and today it never went above 25.

I walked into town and when on the foot-bridge over the Point, I thought the wind was gonna freeze my face. I came home via the 6th Street Bridge. The wind was not as virulent.

Today, the Euro hit an all time low and while in town, I went and bought some. I came home and spent the afternoon restoring the system on the new tower PC. I had downloaded a package of analog-clocks screensavers and with the package came a miserable trojan – pop-fuz. It littered the browser with pops up; it put McAfee into overdrive; and on the blog, it made any Internet related word a link. I would try and do some work, but instead spent the whole time responding to McAfee’s virus alerts.

For some reason in this round of pictures, I am noticing how many wires there are. The above image is of Sampsonia Way the premier Art Street here on the North Side. The wire mesh is a combination of the ubiquitous wires that cross the street and the wild-grape vines that use the wires. Last year someone cut the vines, but it will be a few years before the dead vines disintegrate. And when I was in Canada, I couldn’t get over the fact that every image I shot had wires in it.