we are the warp, angels the weft

Last Sunday, I spent time at Allegheny Cemetery shooting images for my photography class. We were each given an assignment card and mine was to find abstract designs inside an image. I thought that I could shoot some of the scroll work on the various grave-markers and see if that would look abstract. The problem with the granite scrolls was contrast; there just wasn’t enough of it. Also, I think it’s harder to make curves look abstract. So, I headed up the hill to the Porter grave with its massive oxidized-copper angel. The green patina should give me the contrast I was looking for. 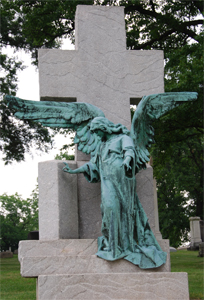 I wanted to work with the 50 mm lens, so I climbed onto the steps of the massive Porter Angle monument and started shooting. The above image is the tip of the angel’s wing and the granite cross behind it. (I’m standing behind the angel, shooting up at its left wing.) The pic was shot in portrait, but I wanted to see if it would look even more abstract if flipped. In landscape all clues are confused and without some references it’s hard to identify each elements. I also cropped the bottom eliminating any clue of the massive granite cross. I also debated cropping the image so that that wing-tip would be at the right edge, but having the extra blue seems to suggest that the wing-top is reaching. (I sent the instructor the portrait image, but am thinking of also sending this version too.)

For some strange reason, the above image makes me think of Ortigia with its undulating coastline and the wing-tip a finger of a Colossal pointing east – back to its home in Greece.