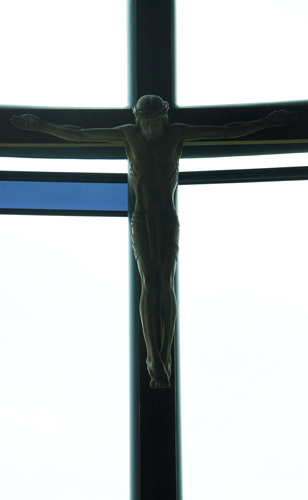 There are two side-trips I’ve been wanting to do when at Rose-and-Derrick’s. Today, I got to do one of the two – visit St. Benedict Monastery on East Drahner Road. Rose and I got back to her place in the early afternoon and after expelling the last of the Sault residue, we took a drive down East Drahner. (Rose who’s lived there some 20 years, had no idea the monastery existed.) The complex is rather small in comparison to other monastery properties. It has a huge modern church, the monastery and a new large retreat house.

The chapel is this huge modern church with floor to ceiling windows behind the main altar. (The chapel was completed in in 2000; the architect was William Wyzinski.) The image on the left is of the corpus behind the main altar. The architect uses the window frame for the cross, putting the corpus at the junction of a horizontal and a vertical pipe. I like the image, especially the blue rectangle on the left. It’s a window shade that was pulled slightly down. I find modern religious architecture not very inspiring; it lacks a sense of the sacred. However, the monastery chapel on East Drahner Road works well as a sacred space. The best example of modern religious architecture that invokes the sacred is Le Corbusier’s Notre-Dame du Houte in Ronchamp. Seeing the hilltop chapel for the first time in the rear-view mirror and then walking its stark interior were amazing experiences. The chapel at Ronchamp was commissioned by the Dominican friar Marie-Alain Couturier. His quote – better to commission geniuses without faith than believers without talent – is amazing and a pillar of faith for the Church during the Renaissance. (The modern-day Republican Party seems unable to commission politicians who are either craftsmen or geniuses at compromise or governance. Primary voters would rather elect a presidential candidate who is a believer in the rule of white-men, regardless of his lack of talent to lead a heterogeneous country.)