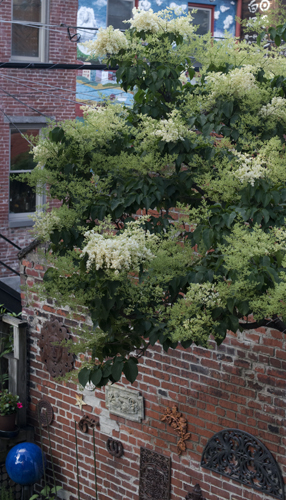 The Japanese lilac is full of blossoms. The plant is part of the olive family and the blossoms are bisexual, with fertile stamens and stigma in each flower.

Bitter winters produce the most blossoms. The plant is threatened and produces more flowers ensuring more seeds. (In early spring, the city streets are filled with blooming wild almond. In late May, the old streets of the Central Northside are filled with blooming Japanese Lilacs.) And as the small flowers fall, the back-yard will be covered in white. One of the side-effects is that I’m popping antihistamines because of the over-abundance of pollen falling from the blossoms.

I’ve written about the Japanese Lilacs before – the smell reminds me of my time in Rome in the spring of 71. The white flowers are everywhere in the ancient city and the perfume infused the spring air.

Last year I began replacing the terracotta pots, because they were cracking and crumbling. They may look good, but they are made for a warm Mediterranean climate. Also, last year was the first year with the new surface on the side-yard. This year, I finished replacing all the old pots and filled in the holes. (I ended up buying 6 new plastic or ceramic pots.) I’m assuming that going forward, I will not need to buy replacements.

This year, I’m trying to grow some added vegetables – peppers and zucchini – and some new flowers – hollyhocks and sunflowers. Don’t know if I’ll have any luck with these. The zucchini is the biggest gamble, I have enough room for the runners, I just don’t know if the plant will like living in a huge pot. The hollyhocks will end up against the back fence, but the sunflowers are in serious danger of being eaten by the dogs. Bilby has discovered them and apparently the leaves must taste good, because he has eaten all but two plants. (Jack doesn’t seem interested, but Bilby has started to also eat the green blueberries. All the dogs have eaten the blueberry flowers, the green berries and the ripe berries.)