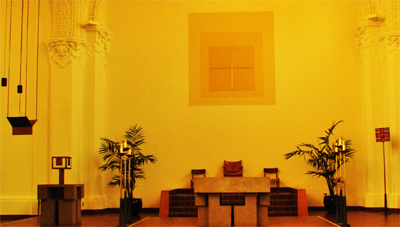 This is the third entry about Napa.

The surprise yesterday was finding the Christian Brothers Novitiate and Holy Family Institute next door to the winery. Tom-and-Kathi had been to the winery before, but neither had ventured into the next property. I saw the bell-tower on the Spanish facade and had decided that I wanted to come back after touring the gallery.

Tom went up to the sign and discovered that it was the Christian Brothers Novitiate. This is comparable to the Novitiate we were at in Narragansett, Rhode Island. This was the west coast version. The above image is the Mont La Salle Chapel and what’s amazing about it is that it was renovated in the same style as the chapel in the Brothers Novitiate in Barrytown, New York. I found the black-and-white picture of the Barrytown chapel online. 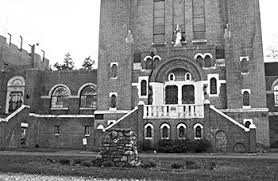 When we were at Narragansett they took us on a trip to the Barrytown Novitiate and Mother-House. (Most of the Brothers who were 10 years older than me, had gone through the Novitiate here on the Hudson. The Narragansett facility wasn’t built until the early 60’s.) The original chapel building, from the outside was your typical European church structure, and walking in to see the modern renovation was a shock. It was amazing to see this minimalist chapel in a building that must have dated from the 30’s.

I’ve sent Bobby an email asking if he can find out who did the renovations both at Mont La Salle and in Barrytown. He answered that the Brothers had contracted with the Rambush Architectural Firm for the Mont La Salle Chapel, the Barrytown Chapel and the chapel at the Brothers Washington DC house.