i could be in spainsan francisco – 2nd entry 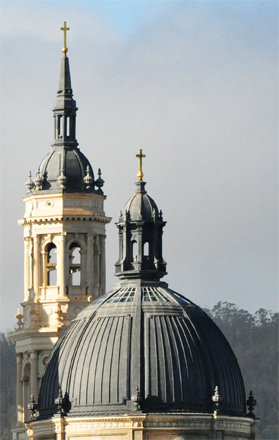 Up the street from Tom-and-Kathi is the Jesuit University of San Francisco. And given that the Spanish discovered California and that Ignacio de Loyola was a Spanish nobleman, the university church and the priests’ residence are late Baroque and beautiful against the morning sun.

The image on the left is the copula and one of the bell-towers from the large campus church. (My goal is to go there tomorrow morning and shoot the interior.) The image was shot from the Jesuit Mother-House that now houses the University Admin offices. The Mother-House complex is high Baroque and its soft stone facade gleams in the California sun.

As I walked around the old Mother-House, I kept thinking that Tom and I lived in the Christian Brothers’ Mother-House in the late 60’s. It wasn’t in California, but in grey New England. But is was every bit as grand and expansive.

There really was a time when Mother Church added to the American culture; when it nurtured its European immigrants in the New World. Mother Church brought over the priests, nuns and brothers that created some of the best schools in the country. And it supported this group that educated the children of the immigrants giving them the opportunity to fully participate and contribute to the economy and culture of the New World. And for this grand legacy, I may have to rethink my antagonism towards Mother Church.