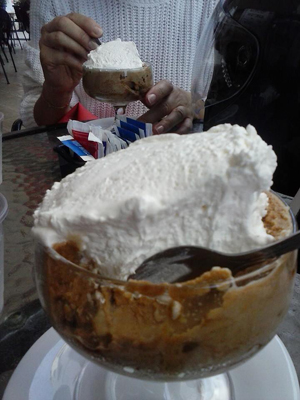 During junior year, I lived on granita di caffè, senza panna – coffee ice, no-whip – until my hands shook so badly and I had to cut back on the caffeine. I mention this, because the image on the left, from the FB page of Caffè Tripoli in Martina Franca, looks most like the granita I gorged on. But granita has gone up-scale and therefore is now served in small cordial glasses befitting the new glitterati traveling through Italy. (F that, I want a sundae-size glass of finely shaved, frozen coffee. Tell me that that doesn’t look like something worth getting the shakes for? Minus the whipped cream of course.) In college we were poor kids, and a big scoop of coffee ice was a cheap order that allowed us to sit and people-watch for hours. (We saved our money for Courvoisier.)

One of the hopes of this trip, is that we’ve finally found a place that has all the amenities – salt-pool, AC, remote location, but close enough to the centro storico to allow us to go out for a passeggiata, a gelato, a granita. (This means I’ll have to pack some decent, non-tourist clothes.)

As much as I liked Earle-and-Suzanne’s in Isola di Fano, going out after dinner was really not an option. The closest small town with somewhat of a night-life was Mondavio, but it was over the hills and through the woods on narrow roads with no street lights. But Puglia is flat and Martina Franca is a two minute car ride. I hope we can walk there, but that will depend on decent roads free of mad-driving Italians. (As I pack, the old bitch of a nun who told me that I was obviously Italian, but my clothes screamed tourist is still in my head.)