The title is the Calabrian dialect word for cactus-fruit. There are two colors for the fruit, yellow and the burgundy-red in the image on the left. I think the red ficunniane have a bit more taste. 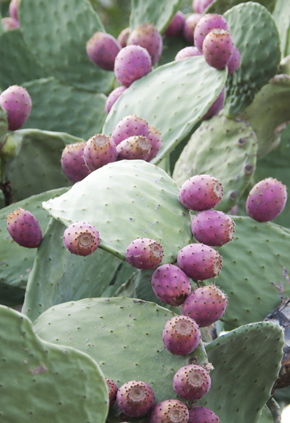 With this being more of an eating trip than a sight-seeing one, we picked and ate a lot of fruit as we walked the stonewalled narrow lanes. We picked and ate figs off the trees, we picked and ate blackberries off the brambles that covered the stone walls and Derrick decided to try his hand at the prickly cactus-fruit; the plants were everywhere and they were full of ripening ficunniane. Rose put up a fuss, because of the spine – the thin thorns – and I was determined to not get them on my hands. Derrick diligently used paper-towels to handle the fruit and then cleaned them in the sink. I went after him to clean the skins and made sure to reach into the sink with a thick wad of paper-towels and then dried my hands on the tea-towels. Well, I got the thorns on my fingers and I spent lots of time finding them and pulling them off with tweezers.

Ficunniane are a difficult fruit to pick and handle, because the outer shell is covered in both thin and thick thorns. The thick ones are obvious and easy to avoid; it’s the thin almost invisible ones that get stuck in fingers. (I’ve never been able to peel them without getting the almost invisible thorns stuck in my fingers and in my old age, I let my Dad peal them.) The fruit is also full of seeds and not everyone is willing to deal with the seeds or focus on the fleshy pulp.

Last year in Belmonte, the owner of the albergo diffuso had made a wonderful after-dinner liqueur from the yellow cactus-fruit.

Let me talk a bit more about the eating. Puglia is now famous among travelers for its cucina povera. (Many of its chefs have come to America and made a name for themselves and the foods they grew up eating.) As a matter of fact, Puglia cuisine is everywhere online and Rose was able to identify well-reviewed restaurants in each of the small town we visited. The most talked about dish in the cucina povera repertoire is fave e cicorie selvatiche – pureed fave with wild dandelions. One place we ate at, the owner made an effort to explain that fave e cicorie selvatiche are really a winter dish and that restaurants who serve it are doing nothing more than catering to the tourists. That made perfect sense; the dish is heavy and not something I associate with light summer fare. But we weren’t ever gonna get to Puglia in the winter, so we joined the throng of tourists and ate the pureed dish.

The best part of the cucina povera was that I could eat vegetarian the whole time we were there.