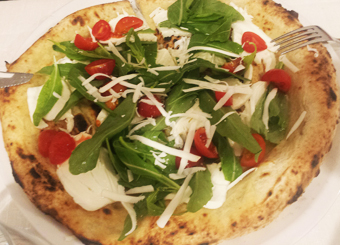 One of the benefits of traveling with my cousin Rose is that she will steer us to the best places to eat and to the best food items to buy. And Puglia, more than anywhere else we’ve been, has a rich tradition of cucina povera – peasant cuisine, or the food that the poor grew, cooked and ate. And with our parents being poor southern Italians, this is the food we grew up eating.

We got here late Monday night and rather than try and cook, the rental agent suggested a pizzeria in town. I had the arugula and mozzarella (Derrick took the pic with his phone.), Rose had tuna and capers and Derrick had a capicola topped pie.

The next day we went walking and picked figs and blackberries as we walked the stone-walled lanes. Dinner last night was a fresh tomato sauce, seasoned with sweet Tropea onions, and fresh ricotta over a pasta. Today, we had lunch in Ostuni. Rose and I had the antipasti and Derrick had a pasta in a green pesto-like sauce made from nettles and served in a cup of bread. (Nettles is such a clear example of cucina povera. Imagine making a delicate sauce from a plant called a stinging-nettle and that most Americans would call a weed and kill on sight.)

The antipasti were different. There were two of each of the following:
– start-shaped asparagus mousse
– potato polpette
– fresh ricotta topped with caramelized onions
– stuffed eggplant
– a grain mixture colored black with squid-ink and topped with melted Gorganzola
– cod in a black squid-ink tempura batter
– sausage and mushrooms
– polenta cakes, and
– a bag of different cuts of bread.