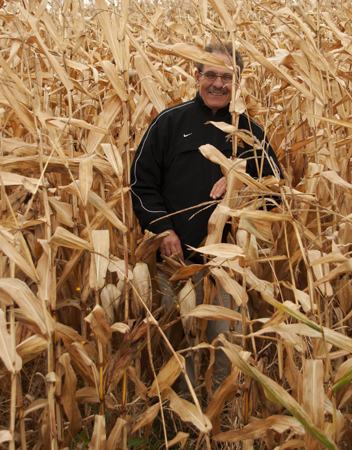 On the drive to Harrow, I passed all these corn fields and I assumed the corn had been harvested and that what I was looking at were the dry stocks minus the ears of corn. Not true. According to Rainer, the corn is still on the stock drying. (The less water content in each kernel, the more valued the crop.) Weather permitting, farmers leave the corn on the stocks to dry as long as possible. This morning, Rainer called the farmer down the road to see if he was harvesting, because he wanted me to see the combine. The harvester is a gigantic machine. It cuts the corns stocks about six inches off the ground and then separates the corn from the stock.

Frank is in the middle of the dry corn stocks.

The other farm-thing we did was pick apples and eat them. Another of Rainer’s neighbors, grows a variety of apples and many were still on the dwarf trees. (The farmer explained how all his neighbors looked askance when he planted the dwarf trees.) What was surprising was how soft the apple skin was and easy to eat. Most times, I’m peeling the skin from store-bought apples. But when the apple is freshly picked, the skin is still full of juice. Also, the commercial apples at the grocery story are covered in wax to make them look shinny and appealing.

We spent Friday afternoon on an indoor court hitting tennis balls back and forth. I laughed when Ron and Frank had to wrap their knees in various contraptions and naturally I did a lot of trash talk. Here were the two premier athletes of the group having to don their bionic garments in order to hit some tennis balls. I continued the trash talking, because after the first 10 minutes I ended up playing against the two of them, because they needed breaks. Me, the one who had refused to play any organized sports, against the two who played organized baseball, basketball, hockey and tennis. During dinner, I asked after their various injuries and realized that young athletes come into old and middle age with a lot of aches and pains. Ron and Frank had suffered various injuries while playing sports when they were young and foolish. Their conclusion is that it had been worth it.