the making of a pride 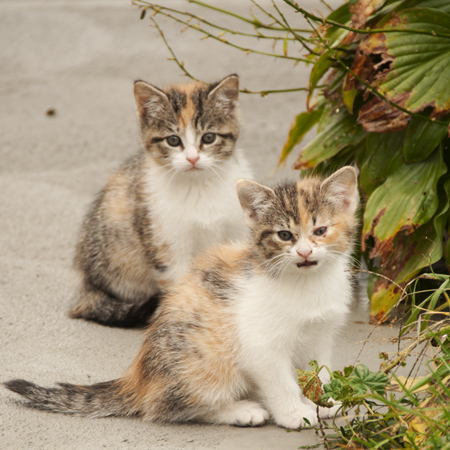 There’s always a cat story when we visit Rainer and Lynn. This year, they had 4 kittens they were raising, because the mother, a week after giving birth, left and never came back. (Lynn suspects she was killed by the coyote or foxes that hunt the wild cats.) Lynn took over and the kittens are now eating solid food. They do not domesticate the cats on their property, but supplement their diets to make them healthier.

The two in the image on the left are part of a trio – Ursula, Cruella and Maleficent. The missing kitten is shy and nowhere as rambunctious as her two other sisters. While I was shooting, the shy one watched from her bed-box. The litter had 4 kittens – the three females and an all white male. The kittens spend the day outside in and around the milk-shed, but are brought in for the night. Eventually, they will spend their whole time outside. There are also seven grown cats in addition to the kittens. Five of the seven are males and when the females come in heat in late February, one male will emerge as the alpha and he will drive out all the other male cats. Lynn said that over the years, they have lost many many cats. The pride can only have one alpha and all the other males are driven off. (Lynn said that she saw one of their males at a nearby farm. He had apparently become the alpha in the pride that lived there. But that was the only time she ever saw one of the male cats that had been driven off from their property.)

In the morning, I stepped out to shoot the rising sun and the grown cats swarmed around me. Rainer feeds them in the morning and me coming out the door signaled food. They followed me around, but soon figured I had no bowls and sat down and waited for the one who did.