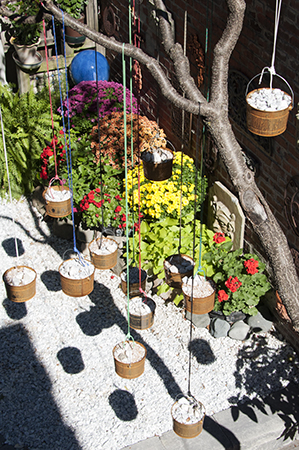 The autumn sun moves so quickly. I shot the image from the upstairs deck and by the time I got downstairs, the area with the shadows was half what you see. I am trying to capture images that aren’t the typical fall items – turning trees and mounds of brown leaves.

Two Discoveries
1. Hearing the va’ pensiero chorus from Nabucco live and in context. It’s the lamentation of a people in exile.
o mia patria si bella e perduta
o membranza si cara e fatal
Verdi may have put the words of longing into the mouths of the Hebrews slaves, but every Italian knows them as the anthem of The Risorgimento – the struggle for unification and the fight for freedom from foreign rule.
2. Hearing a live recording of Simon and Garfunkel’s 1976 Carnegie Hall concert. It’s two voices and Simon’s guitar.
go home outsider
Mississippi’s gonna be your buryin’ place
A young Paul and Artie give a patina of innocence and naiveté to the words of revolution and introspection. And the lead into A Dangling Conversation sets up the recurring theme of isolation. Also, the album has a spontaneity and a bootleg quality to it.

Canadian Thanksgiving is being celebrated today, but this year like last, I didn’t go up. Rather, I’m heading up to Harrow in a week-and-a-half to play golf with the boys. Will grain and corn stalks still cover the concessions of Essex County or will the land have been stripped bare?