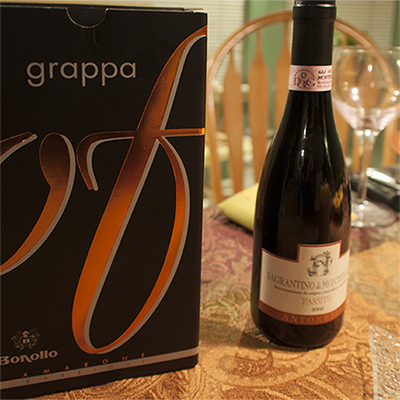 The drive to Rose-and-Derrick’s was easy and with the sun. Also, Sundays mean no rush-hour traffic. And I’m getting more familiar with 696 East and Telegraph Road as and alternate to potholed I-75, cancer-alley and the heavy traffic through Detroit. Telegraph-Road/Michigan-24 parallels I-75, but it’s a much more pleasant drive. (I don’t know how to do this route going south. I’ll have to check with Derrick. I wonder if it’s the Square Lake exit on I-75 South?)

After supper, Rose decided to pull out the Passito wine she bought when we were in Umbria, in 2005. We had gone out to eat at this very nice restaurant. The place was in a converted post-office a bit out of town. Spoleto was a great place and I’d go back.

Passito is made from dried grapes. The grapes are usually dried on straw mats or left on the vine until almost raisin-like. The drying concentrate the grape juices. The technique dates back to pre-Roman times. The resulting wine is sweet and similar in density to a Sauternes. Needless to say, we finished the small bottle. (It’s a 375 ML bottle.) It was a great way to begin the holiday season.

The grappa box in the image is from San Marino. We had gone there in 2005 and Rose-and-Derrick bought many items at the duty-free in the small principality.