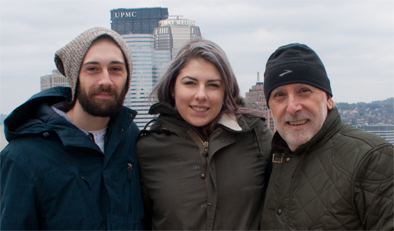 Christian and Maria drove down to visit and we had a nice time. The last time Christian was here, he was 7 and the four of them – Dave, Jo’, Christian and Seane – spent their visit at Ross Park Mall. When we were talking about him and Maria coming down, he had no idea what they would do except go shopping. I explained that we would do the whole sight-seeing tour, but he had no sense what that meant. He was too young to remember; he did remember Kennywood Park.

I’m the only family member not to have met Maria and I was trying to find a way for us to meet when she was in from Nova Scotia. (The two of them graduated from Acadia University in Wolfville, Nova Scotia.) I even considered flying up to Toronto for the weekend, but that meant being there with no car and no way of visiting with Frank-and-Norma, Renato-e-Gina, Mary-Domenic-and-Alyssa. Flying in didn’t sound worth it.

We began with a walk from the North Side into town. This was through West Park, over the Fort Duquesne Bridge, through Point State Park and into Gateway Center. Once back on the North Side, we drove to the South Side and got on the incline.

After lunch at the Porch in Schenley Plaza, we walked the Pitt campus. When Maria saw the dinosaur outside the museum and I told her about the exhibit, we went in and did the gem and the dinosaur displays. (The last time I was in the museum to see these two exhibits, it was Frank, Norma and I walking through the jewelry cases and the reconstituted dinosaur skeletons.)