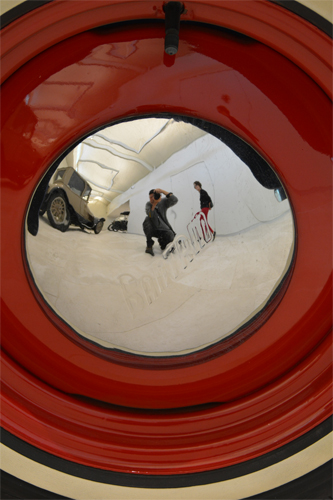 Yesterday, Sarah and I went to the Frick to see the photographs of Jacques Henri Lartigue – The privileged, younger son in a wealthy, glamorous French family, Jacques-Henri Lartigue (1894–1986) was a first-hand witness to the amusements and pleasures of life in the Belle-Époque and early-20th century France. The title of the show is Fast Cars and Femmes Fatales. (Isn’t the alliteration great – the f’s, the a’s and the t’s?)

It’s always both amazing and a surprise to see how the one-percenters of early-20th century Europe lived. The women in yards and yards of silk and satin, their exaggerated hats and their frou-frou dogs; the men in their Spats, fur-lined over-coats, their fedoras, their cigarettes. 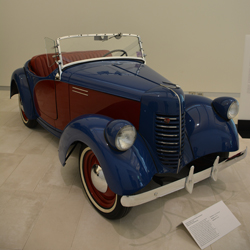 Afterwards we went to see the new space that houses the Frick’s collection of antique cars. The image on the left is our reflection in the hub-cap of a 1939 Bantam Roadster; and the image on the right is the car. The coupe was built in Butler by the American Bantam Company. With the coming of WWII, the car was adapted for use as a reconnaissance vehicle, making it the first jeep prototype.

The first image in the above slide-show, is the hood-ornament on the Bantam Roadster.