peach-tree and cucumbers – the before 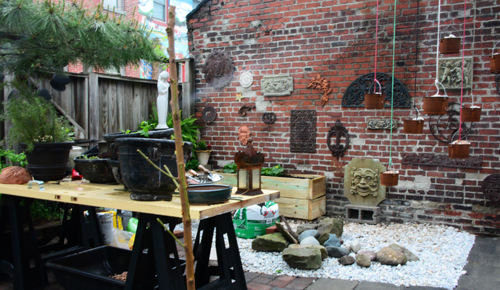 Had thought that after buying the 3 large, plastic pots, I was finished with buying new containers and that I could look forward to growing vegetables along with the flowers. But the large pots were the worst. They didn’t drain, even though I had filled the bottoms with shards of the terra-cotta. One was so bad that the whole pot became water logged. I had to break the bottom tray to get the water to seep out and even then drainage was so poor that the soil stayed wet throughout the whole growing season. Well at least I now know why the vegetables did so badly last year. My plan was to re-fill the plastic pots with new soil and to replace the shards with stone. When I did that, I discovered that they were all cracked. After some consideration, I decided to replace the pots with a planter. The planter would also give me added room to grow a few more vegetables.

This year, I’m growing cucumbers. (The green leaves in the wolmanized planter against the wall.) The hybrid plants will produce fruit throughout the season and I love cucumbers from the vine. A very different vegetable than the wax covered, tasteless things one buys at the grocery store. I’m also adding chives this year. These I will use too. The other big step was to not grow basil. I never used enough of it and once the stalks turned wooden, the leaves would be bitter.

The narrow trunk in the foreground is the new Redhaven peach tree. This purchase started, because I wanted a white dogwood to plant in front of the brick-wall. I had pictures in my head of white blossoms against the red bricks. But a Calabrian immigrant can’t plant for ornamentation; it’s against our DNA. So, I did some research on the best fruit-trees for this region and came up with a dwarf Redhaven peach. It will put out blossoms and give me tree-ripened peaches.

The contraption behind the peach tree is my old kitchen door in two saw-horses. It’s a great work area, minimizing bending and lifting. At the edge is a rusted, old lantern that I want to restore and repaint.