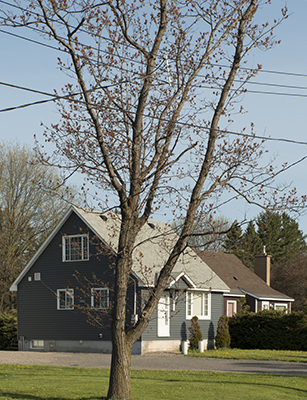 The title – vernacular – is a favorite word of mine. However, it’s always been difficult to apply it to anything other than the switching of the Catholic Mass from the universal Latin to the local language. This mental block comes specifically because I was raised Catholic and can remember Vatican II and the switch – the altar moved so that the priest faced the congregation and the old Latin became English. But my non-Catholic friends have always used the term to refer to the architectural designs common in an area. And I like applying the term to housing design. The house in the image is a typical 1920’s/1930’s frame structure here in Northern Ontario. It resembles in form, what we in the US, would call Cape Cod style. (I remember seeing similar house in the beach communities around Narragansett. John’s family summer cottage looked a lot like the house in the picture, just smaller and with no basement.) The alterations, to the typical New England cottage design, are mainly in the steeper roof pitch – understandable given the northern climate and the snow-bound winters and in the addition of a basement lifting it off the ground, off a ground that can stays frozen 5 months of the year.

Without a car, I’ve been walking everywhere and this morning I headed west and into the subdivisions on the other side of Goulais Avenue. I had never walked in this area before and it was wonderful to discover a neighborhood full of old houses that have been maintained, upgraded, but not fractured. (The house in the image does not have its front steps, but the pylons are there to support them once they are installed. Let’s hope that they don’t use wolmanized or pre-fab materials.)