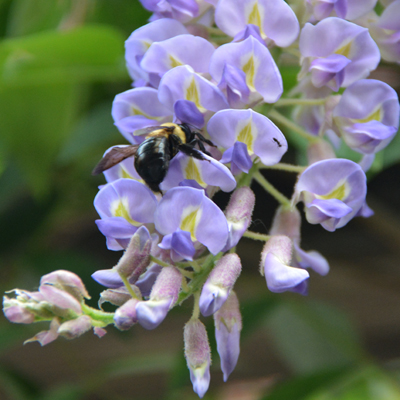 The wisteria is planted in the worst soil, in the most inhospitable spot and yet in its second year it bloomed. There are more than a dozen flower-clusters and the bumblebees love them. They climb right into the flower, almost disappearing into its cup-shaped petals.

I spent some time tying the new growth down so that it didn’t look like wild green hair sprouting from the top of the fence post. I want to grow the vine all the way down the lateral beam keeping it long rather than thick. And I suspect it was that pruning and shaping that I did last year that produced the flowers; that and the genetically modified plant the company shipped. (Years ago when we planted a wisteria at Rick-and-Sarah’s the literature all said that it would take 7 years before the plant produced flowers. Research also pointed out that the plant produced blooms when it determined that it was in danger – poor soil, bad environment. I remember thinking that I could plant it in the concrete, in the corner near the alley between my house and the neighbor’s.)

The genetically altered plant ended up in the north-east corner, because the grape-vine I had there needed extra care to produce grapes. (I wasn’t willing to introduce the insecticides needed to keep the grapes from falling off the cluster.) It took almost 3 years to get rid of the grape-vine. When I planted the wisteria, I was expecting a vine that would cover the long two-by-four that straddles the top of the fence. By the end of last year’s growing season, the vine was half-way across the back-yard. It gave the top of the fence an added dimension. I liked it.

I’ve been recording the daylight in Sault Ste Marie, because I finally figured out why my dad and his fellow immigrants are able to grow vegetables in such a short growing season. The answer is the amount of daylight. Down here we have the temperatures, up there the cold lingers, but once the daylight comes it stays. They get almost an hour more of daylight than we do down here in Western Pennsylvania.