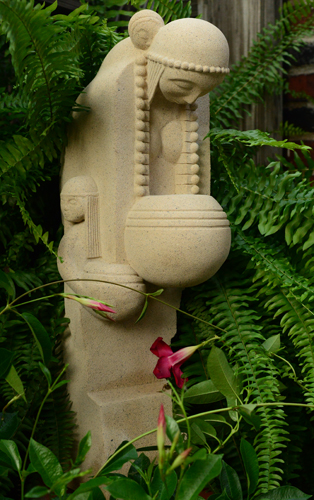 Wright created the Nakoma sculpture as a tribute to the Winnebago Indian Nation. The female Nakoma and the male Nakomis were to stand in large circular shallow water basins at the entrance to the Wright designed Nakoma Country Club in Madison. Neither the statues nor the clubhouse were ever built in Wisconsin. But, a group of developers purchased the clubhouse plans from Wright’s Taliesin architects and built the stunning structure on the brow of a hill in the Mohawk Valley of Plumas County, California.

There are three figures in the sculpture – the mother, the daughter at her side and the papoose on her back. (I noticed the papoose today for the fist time. I was thinking that the ball shape behind her head was her hair in a bun. And because of that oversight, I cut the papoose out in the large image in the slide-show. In the photo on the left, the small ball shape shows itself to be a face – amazing.) Originally the sculpture was meant to stand 16 feet high with water spilling from the round bowl. The flow was to be the water source for the basin. In 1929 Wright had small models of the female and male figures produced in terracotta. The reproduction I have is from the statue at Taliesin in Spring Green, Wisconsin.

I saw the sculpture back in November when I was at Fallingwater with my cousins and I was temped to buy it, but didn’t. Then when I made the decision to get rid of the Alfonso Ianelli garden sprite, the Wright sculpture came back into play.
(Leger referred to the Ianelli as the breast-examination statue.)

Last Wednesday, I called the gift-shop at Fallingwater and the gentleman that answered – Keith – said they had a second Nakoma sculpture in their store-room. I drove up on Sunday and picked it up. And I spent today rearranging the plants around the new piece.