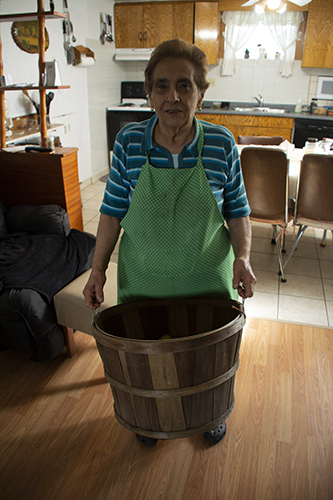 It was time to harvest the winter pear tree, so my dad and I got the ladders out and my mom brought out the bushel and the crook. When I asked for a pair of pruning shears my 90 year old parents laughed. “Just rip them down.” Guess using pruning shears was too hoity-toity.

My dad is one of those people who just wants to get the job done, whether it’s done well or done correctly is less important. So while I was on the ladder cutting the fruit off the branches and placing each pear into a bucket so not to bruise it, he was on the ground with a long stick whacking the fruit off. So much for gathering unbruised fruit. My cousin Joe tells the story that his dad and his son-in-law couldn’t work together, because his dad was similar to mine – get the job done and style and accuracy be damned. His son-in-law would measure twice before cutting a piece of wood; Cump’ Armunte would cut and use whatever came out, making it fit by hook-or-by-crook. Ciccio Zinga is the same way. Guess growing up in Aprigliano in the 20s and 30s must have ingrained similar sensibilities.

For me the obsession for accuracy and correctness come in the writing. I can spend days going over a couple of paragraphs. It would drive Rick crazy. He would write a memo, give it to me to proof and then hate the process of revision.

Many of the pears were on the ground and you could tell the ones I cut from the ones that had fallen to my dad’s whacking stick. He explained that because they’re not eating pears, it’s less important that they not banged up. After-all, the fruit is gonna be cut up and made into jam.

The pic is my mother, holding one of bushels with the pears, in the downstairs kitchen.