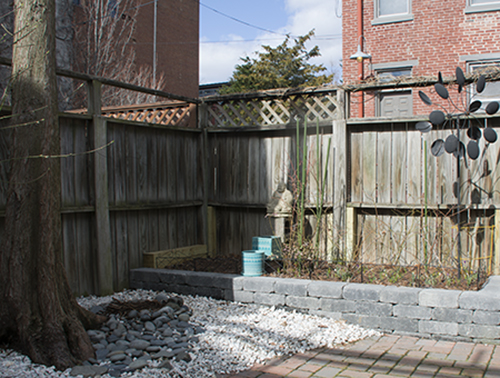 The scales appeared last year and by the time I noticed them, it was too late to treat for them. (I also didn’t want to start spraying insecticide all over the back-yard.) This year, the tree’s spring growth was greatly reduced; gone were the green plumes and candles of scale-free years. I made the decision to cut the tree down and to replace it with a hardy fruit-tree. (Last spring, I planted a peach suitable for this climate and this zone and it did very well.) I went back to the same growers and looked for a hardy apricot and when I found one, it made replacing the Scotch pine easier to stomach. The image is the west-corner minus the cascading pine tree.

Both the now defunct pine and the gigantic red-wood – the trunk on the left of the image – began life as bonsai. I wintered them on the west-side of the yard, the most protected side, and in the spring discovered the roots had started growing into the ground. I left the trees there and watched, year after year, as they grew from their miniature pots to fill up my back yard. Of the two, the pine tree took up most of the usable space, because it was low and cascading. (The red-wood shot straight up and with yearly pruning of the lower branches all that was at eye-level was the beautiful trunk. The last pruning brought the green growth almost 30 feet above the ground; proving more light and space in the back-yard.)