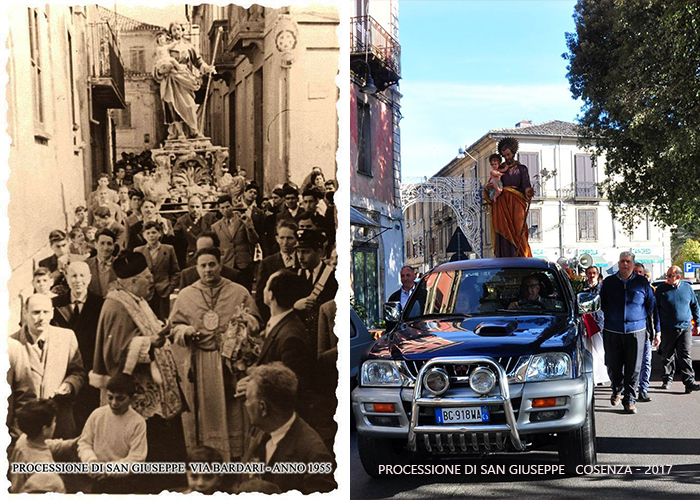 part one
March 19 is the feast-day of Saint Joseph. The holiday’s roots date back to the middle ages, when Sicily underwent a major drought that threatened a massive famine. The locals prayed to their patron saint to bring them relief in the form of rain. In exchange, they promised to honor St. Joseph, the husband of Mary, with a proper banquet. Sure enough, he answered their prayers. In return, they feasted on local foods such as fava beans, which thrived after the rain, as well as many sweets. Since the feast occurs in the middle of Lent, it is a meatless celebration.

The Father’s Day angle is a more modern emphasis. As Catholicism shrinks to a tradition, rather than an active religion, the day is more about fathers than the Saint. (Most notices on social media have holy-card pictures of St. Joseph, but text over the images wishing congratulations.)

There are two things I associate with this date:

There was little fanfare in Aprigliano around St. Joseph, because none of the churches had statues of him and therefore there were no processions. Interesting enough all my relatives from Aprigliano are posting congratulations to fathers and little about the feast-day on their Facebook pages. Even the dessert most associated with this feast-day – zeppole, a dough fritters covered in sugar – are not common in the Apriglianese sweets repertoire.

The old, 1955 postcard is from Pizzo Calabro, a small sea-side town on the Tyrrhenian Sea in south-western Calabria. The photograph on the right (photographer Osvaldo Spizzirri) is from the procession in Cosenza earlier today. (By American standards, Aprigliano is like a suburb of Cosenza, most Apriglianesi work, shop and socialize in Cosenza.) Both pics were posted on the Facebook page Calabria Ieri e Oggi.

Oh my, how things have changed in 62 years!