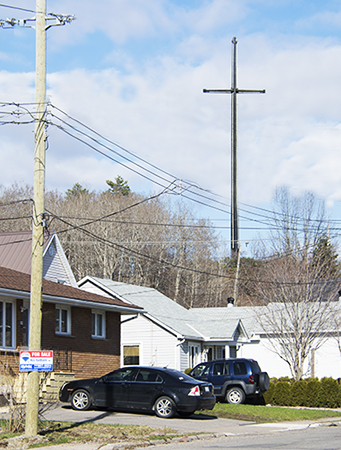 The following is an excerpt from Brian Kelly’s March 22, 2010 article in the Sault Star.

The 12-tonne cross was erected by the St. Mary’s College Men’s Club on May 14, 1960. It’s believed to be in the same area where a cedar cross was raised on June 14, 1671 as part of a French celebration that drew thousands of aboriginals.

A monster bingo, the largest ever in the city at the time, was held at the Memorial Gardens in 1958 to help pay for the cross’s construction.

The cross, which can be seen for about 30 kilometres, is lit by 15 bulbs.

An acre of land is leased for a dollar a year from Huron-Superior Catholic District School Board.

The following are excepts from Mike Verdone’s November 13, 2014 article in the Sault Star.

The cross that stands on Moffly Hill near St. Georges Avenue East, is one of the largest in North America.

It was erected in 1960 as a reminder of a wooden cross that was erected on a hill in the area — more than 340 years ago — overlooking the St. Mary’s River after the French proclaimed sovereignty over a vast portion of the New World.

In 1671 the wooden cross was the centre piece of ceremony dedicating the area to God.

The ceremony was reportedly attended by aboriginal people that represented 17 nations, Jesuit priests and traders, trappers and French army officers.


In September of 1964, when Frank and I started at St. Mary’s, the giant cross was already a city landmark. What I remember most about the 27,000 pounds behemoth was the long steel rope that hung from the horizontal. It acted like a bell-clapper hitting the vertical – black steel banging against black steel. I never thought about what was causing the clanging; it was just one of the sounds of high school. Don’t think I ever considered that a cross, standing on a promontory, could be susceptible to winds rushing across the flats and spiking up the slope. Way too scientific for the addled teenage brain.

As teenagers, we hated the spring winds. The cold weather may have broken, but the miserable winds would flap the tennis-court nets and jar the ball enough to screw up your swing. (And you didn’t dare blame a bad lobby on the wind.) It would be late June before the winds died down enough to not interfere.

Note: The above image has been heavily Photoshopped. The last image, in the slide-show, is a more accurate representation of the area.