the bees have found the wisteria 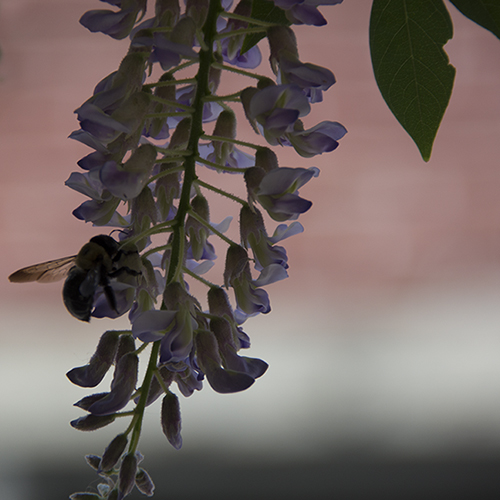 The honey bees, and I’m talking big fat ones, are all over the wisteria flowers. Last year, a few visited, but this spring it seems like an entire hive has found the the purple clusters on Sampsonia Way.

Wisteria is deciduous vine that belongs to the pea family.

Lounging languorously over a fence or pergola – the charms of wisteria are almost impossible to resist. Marco Polo was an early conquest. He brought seeds back from China.

The world’s largest known wisteria is in Sierra Madre, California, covering more than 1 acre and weighing close to 500,000 pounds. It was planted in 1894 and it’s a Chinese lavender variety.

In modern times, botanists are making new plants from layering or grafting; these methods have produced plants that bloom quickly and abundantly.

Bees and hummingbirds are the main pollinators of wisteria.

Image – the pink blur is the bricks of the alley-houses; the white blur is a car; and the black blur is the top of the backyard fence.
Previous   in   2017