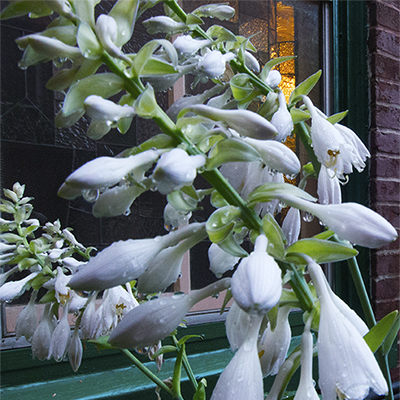 This post is about several things: the rains we’ve had all week, the image on the left, a liqueur made with grappa & camomile and fat blueberries.

I could go on about climate disruption, but I don’t know enough about the science and I don’t want to come across as another blabber-mouth. It’s just that since Tuesday, we’ve had between 8 and 10 inches of rain. That’s more a July weather pattern, but then everything these days is topsy-turvy.

I may not have to water, but the excess moisture is wrecking havoc with the roses.

The rains have been crazy – one minute there’s a torrential downfall, the next the sun is out. I wanted to get an image with raindrops and went out to shoot the hosta flower-stalk. Looking through the view-finder I realized that if I shot with the kitchen window in the background, I was gonna get some strange colors on the stained-glass. What I got was the beautiful gold-brown at the top right of the image. The color comes from the overhead light in my kitchen.

And I used the gold-brown in the border around the image.

Visiting my cousins Renato and Gina is always a wonderful time. This visit, the highlights were Gina’s sister and brother-in-law and Marolo’s Milla liqueur. The label describes it as a liquore alla camomilla con grappa. 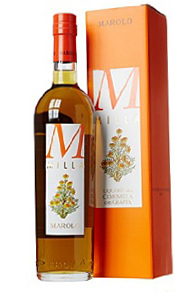 First we went on about gagumilla, camomile in Calabrese dialect. How at any sniffle, cough, ache, suggested melancholy our mothers boiled water and made a cup of gagumilla which we had no choice about drinking. (Gina and Angie’s mom is Calabrese.) We all agreed that we hated the taste; it was yuck. And yet there we were sipping the delicious extract made from camomile and laced with grappa.

I’m old enough to remember my mom making the brew with the dry, yellow-orange, daisy-like flowers. Forget tea-bags or sachets, back then you put the loose dry flowers into a cup and poured hot water over them. Drinking the tea, you hoped the stems and flowers stayed at the bottom and didn’t migrate into your mouth.

Renato and Gina wrapped up a bottle of the liqueur for me to take home. (They are very generous that way and on previous occasions, because I was worried that the custom agents in Buffalo would confiscate any alcohol, I said no to their generosity. But between the beautiful packaging and the great taste, I wanted to try getting the bottle across. The agent in the NEXIS lane had no problem with my having the liqueur and I now have a bottle of Milla in my home.) 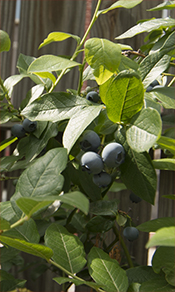 I love going in the morning and picking a bowl full to have with breakfast.

One of the dogs, loves the berries; as soon as they’re let out, he runs to the blueberries and tries his best eat anything within reach. Well that’s not allowed; the berries are for me, so I put up fencing.

Three years ago, after several disappointing harvest, I did some research and most of what I read, suggested cutting the bushes down to ground level. The first year, there was new-growth; the second spring, the plants were full of berries. And now in the third year since the drastic cut, the plants are producing more and bigger berries than ever.

The majority of the plants in the plot are over 30-years old. I have added some newer varieties, but these new plants haven’t produced fruit yet.