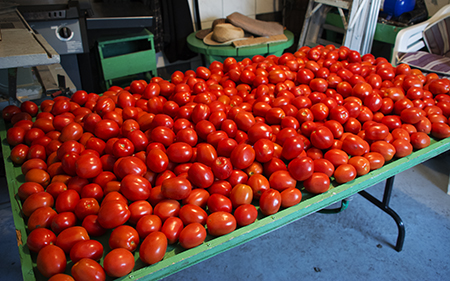 After finding out that Rick, Sarah and I didn’t have any more tomato sauce, Ciccio Zinga made a dash to Metro, a Canadian grocery chain, and came back with two bushels of tomatoes. He paid $12 a bushel. (He was proud of that price, because No Frills wanted $18 a bushel.)

I was called out to take them from the van and to the room in the back of the garage (notice all the stuff – table-saw, grill, stool, table, ladder, and patio-chair), and to spread them on his table with the lip all around. Also, as I dumped the hard Romas on the green table, I’m thinking that they will be here for a while (they as hard as baseballs).

The next task, was to get the ladder and climb into the crawl-space above the garage and bring down the huge caldron for cooking the tomatoes and a smaller caldron for transferring the cooked mixture to the table with the milling machine.

After supper, Ciccio announced that he was going out to cut up the tomatoes, so that tomorrow morning he could start cooking them and be done by noon. WHAT!!!

Next thing I know, I’m lugging bowls of tomatoes from the back-room to the sink; washing them, and then lugging them to middle of the garage where Mr. Zinga had set up his chair and pails. He cored the pith, cut the fruit in half and threw the halves into one of the tall pails. When I asked why he was removing the pith, he said, “We’ve always done it that way.” Never one to accept tradition, I went online and found several discussion about removing the pith, because it was often unripened and if left on, added a bitter taste to the sauce. That made sense.

Let me be clear – I took 4 half-bushel boxes from the van to the back of the garage (each box weighing around 30 pounds), then I took all those tomatoes back out to the sink in the garage and then to the work station in the middle of the garage. WHY!!! Why didn’t he have me stack the boxes next to the sink?

Two bushels of cored and cut tomatoes filled two 10 gallon pails and two 5 quart metal bowls. My mother covered the cut tomatoes with clean dish-rags and we all went back in the house.

Click to read the second entry of making tomato sauce.