It’s 5:00 and I’m standing in front of my dad’s garage, facing south-east and shooting the house across the street and the waking sky.

Click to read the first entry of making sauce.
The door behind Ciccio, leads into the back-room where the tomatoes rested for 5 minutes on the green table. On his left is the sink. Yes, I carried 4 half-bushel boxes from his van into the back room, then back out to the sink and then over to the table. Oh yeah!!!

It’s day 2 of the tomato sauce protocol. My dad has been up for a half hour and he’s already started cooking the tomatoes – the huge pot with the lid on the left, on the burner. 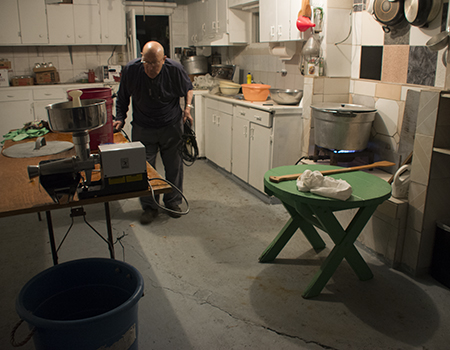 We’re in the garage, where there’s a third kitchen for canning and making tomato sauce. The machine in the forefront will strain the cooked tomatoes removing the peels and the seeds; the big plastic bucket under it will catch the tomato sauce. The long paddle on the small green table is for stirring the tomatoes in the giant pot. (The stirring is muscle building, well at least after the strain goes away.) My dad is getting ready to plug in the milling machine; the tall bucket on his right is full of halved tomatoes that will soon get added to the large pot (more muscle building). The tomatoes cook for about two hours.

The next step is take the very liquidy mixture and transfer it to a smaller pot that he and I lug over to the table. My dad then begins to put the liquidy pulp through the milling machine. (After this first round, I opt for a smaller transfer bowl. Man, lifting a pot full of hot tomato sauce is not pleasant.) When all the sauce has been milled, I get to take the caldron out into the back-yard and scour it clean. (Ciccio claimed that I didn’t need to keep stirring, that the flame was low enough to prevent burning. Wrong!!!)

The caldron is back on the burner and now I get to transfer the sauce from the blue bucket under the milling machine into the cleaned pot. Once I transfer all the sauce, Ciccio starts cooking it a second time and I drive off to my uncle’s to get basil.

By the time I’m back, Mafalda has joined the crew. She is washing the jars and putting then on the round table near the caldron. She shifts and quickly washes the basil and she and I begin to add two leaves to each of the empty jars. My dad using a small pot with a handle and a funnel, begins filling the jars. It’s my job to place the lids on the filled jars and to then screw the rings on tightly. We fill 58 Mason pint-jars. (I asked about putting the jars in a water-bath canner, but my dad said they haven’t done in years. The lid, tightened by the ring, seals as the piping hot sauce cools.)

The jar end up on the counter in the back and covered in a green synthetic blanket. This will slow down the cooling process guaranteeing that the lids seal tightly onto the top of the jars.