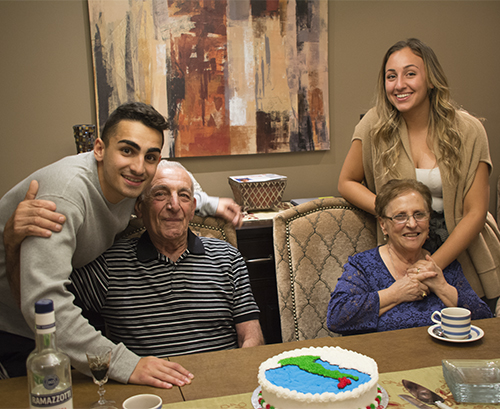 Today is my uncle’s 80th birthday and last night we celebrated with dinner and cake. We’re at Mary-and-Domenic’s and it’s my uncle and aunt, Daniel and Alyssa in the pic.

What amazes me is that my uncle began life in a small Calabrian town – Martirano – on a remote farm and 80 years later, his life is such that he flies down from Sault Ste Marie, to Toronto and then to his daughter’s in Pickering to celebrate his birthday.

I believe Canada has been enriched by these courageous immigrants who left their homes and made a new life in a foreign land. It’s a generation, pushed out of Italy because of the war and its aftermath, but it’s also a generation of pioneers. And much like the pioneers of an earlier age, they too had to conquer the wildness of Northern Ontario in order to establish homesteads, build cities and raise families. Sault Ste Marie is no longer the industrial center that it was back in the 50’s and 60’s when my uncle’s generation worked its mills and factories; it has lost most of that manufacturing base to cheap labor in other parts of the world; and it has lost most of the kids, from those immigrant families, to Toronto, to Vancouver, to the United States. But the modern world, unlike 19th century Europe, affords us the opportunity to meet up and to celebrate life’s milestones.