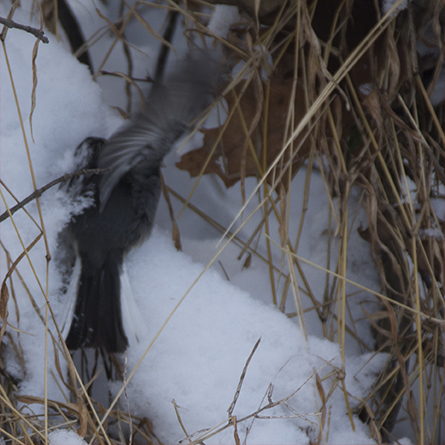 There were birds all along the walk. They flew in and out of the reeds, that were above the snow on the side of the hill, pecking for seeds. Most were brown, sparrow-like things, but the one in the image on the left could be a mockingbird, but I’m not sure. I liked that I caught it fluttering its dark-blue wing and I liked the contrast between its very white tail-feathers and the surrounding snow.

Actually today was a wildlife day; besides the various birds hunting for seeds, there was a red-tail hawk monitoring the skies and deer that came down to the roadside where the snow was less deep and twigs were accessible. Never mind that the snow, around the picnic shelters, was littered with animal tracks.