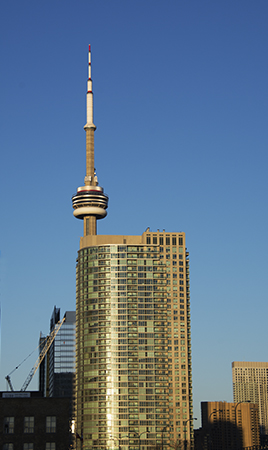 It’s 7:00 am, it’s a chilly -3 Celsius, and we’re on our way to the St. Lawrence Market. Because we can’t find on-street parking, guess others were up well before us, Franchino parks in the Loblaws’ lot and we walk up to the Market. (The shot is from the roof of the parking lot. The shadow on the bottom right lets you know that we are in the eastern part of the city and the sun is coming up off the Scarborough bluffs.)

There has been a public market on the site – corner of Front Street East and Jarvis Street – since 1803. It was great to see a plethora of root vegetables in the various stalls. My favorites were the orange beets.

After the Market, Franchino went to Loblaws for mangoes and cilantro; he’s making a salad for Sunday dinner.

Finding a landscape, in Northern Ontario, that was still covered in feet of snow was disconcerting. Temperatures in Toronto may be chilly, but blue skies and the absence of snow point forward to spring not backwards to the misery of winter. It’s great to be out of snow country.

Besides the weather, being away from the claustrophobic immigrant community is another plus. I can’t figure out if the atrophy, in the Italian community in Sault Ste Marie, is due to aging. The majority of immigrants that came to Canada in the 40’s and 50′ are now in their 90’s and focused on end-of-life issues rather maintaining a healthy, progressive community. The claustrophobia may be symptomatic of aging and the lack of new blood, but Sault Ste Marie is not unique in this degeneration. Most manufacturing centers in Canada and the US are wasting away and the left-over populations are unable to deal with the protocols that impose a new world-order.

Small-town Canada – Sault Ste Marie, Harrow, Leamington – is where I know people that reject cell phones, reject the internet. These new fangled devices and technologies don’t fit into their analog experiences and are therefore marginalized. It’s these attitudes and fears that make slogans like – Make America Great Again – resonate because small-towns are being decimated my modernity.