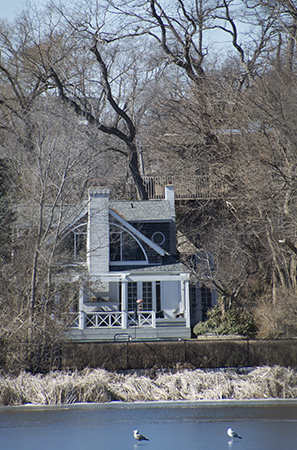 The lingering ice on the edges of ponds and lakes is a reminder that winter still holds Canada in its grip. The sea-gulls, in the bottom of the image, are standing on the thin edge-ice. Here in Toronto winter’s grip is not the tight fist that is still strangling Northern Ontario, instead it’s a velvet choker suggesting we wear winter coats, winter hats, gloves and scarves.

We did a 2.3 mile hike through High Park and I shot the house because I had never noticed it before – it’s been hidden by the greenery that perimeters Grenadier Pond. It’s one of the many high-end houses, in the upscale neighborhoods, that surround the Park.

When my family would visit back in the late 50s and early 60s, the Park was one of the first destinations my grandparents took us to. They lived 2 kilometers west of the Park on Jane north of Bloor. Sundays we would drive into the Park and picnic. My grandmother was in charge of the food and set-up; my grandfather walked us down to the pond and the zoo. And here I am, fifty years later, still in Toronto’s west-end; still walking High Park.

The main difference between that long-ago time and today, is that this morning the Park was full of young families, lycrad joggers, and determined walkers. In the late 50s/early 60s we had the picnic grove to ourselves. Immigrants went to the Park; the staid, nose-in-the-air Torontonias never did anything as plebeian as eat outdoors.

Back then, Toronto was ruled by first and second generation British immigrant families. Blue Laws were in effect and Toronto closed up at 5:00pm on a Friday and didn’t reopen until Monday morning. If you wanted to have a good time, you drove the 5 hours to Montreal. Them French were uncivilized, uncouth, peasants still. My aunts and uncles would often head east to Quebec for a weekend away from the rigidity that was English Toronto.

The British legacy families are in their twilight; their children have inter-married with the non-English and new immigrants have pushed the old British into the insignificant single-digit demographics.