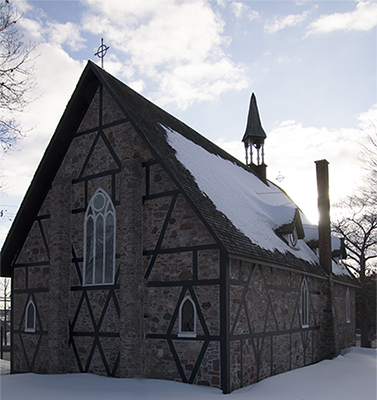 As Imperial England marched across the new continent, the Anglican Church was one of its most successful brigades. The Shingwauk/Fauquier Chapel, on the grounds of Algoma University, is a left-over from the time of subjugation and raping of Native people by the British Redcoats.

The Bishop Fauquier Memorial Chapel is a small red sandstone chapel built in 1881-1883 on the site of the Shingwauk Indian Residential School, a newly established school for boys, from the Garden River First Nation, in the Anglican Diocese of Algoma. 1

But the time of empire is over, and as it recedes into shadow its war-crimes get whitewashed and disguised in pageantry, romantic melodramas, heroic movies,2 country homes and quaint stone structures. I’m shooting a beautiful historic chapel, on a rise, on the north shore of the St. Mary’s River. In the early 19th century, what did the Indian children, ripped from their families and tribes, see when they looked out their dormitory windows, what did they feel when they heard the chapel bell toll?