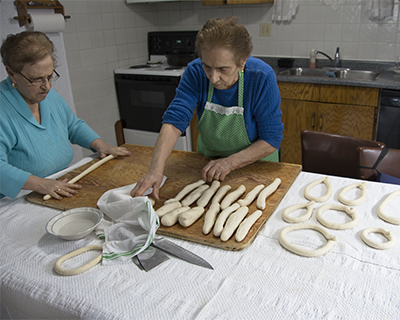 my aunt and my mother
making taralli

On Thursdays and Fridays, a relief-worker comes in to sit with my dad and my mother uses the time to go shopping, keep appointments or bake.

This week, because I’m visiting she asked if we could make taralli when the relief-worker was here on Thursday. This morning, I suggested we put off making the taralli and that she take the time to rest. Her answer – “Rest !!! And have people think I’m a vacabunna – a lazy good-for-nothing?” Needless to say, we made taralli. My mother is 93.)

Taralli are bread-sticks in an oval shape. They are most common in southern Italy, and in Calabria they are flavored with small black anise seeds.

My mother began early this morning to set the yeast and by noon, she had mixed the dough and was ready to make the taralli. In the image, my aunt, on the left, is rolling out the dough into a long thin strip that she will then form into an oval pinching the ends together. (The small bowl has water in it and both my aunt and my mother would lightly wet their hands while rolling out the dough. The wetness stops the dough from sticking to either their hands or the kneading board.) My mother, in the middle, is rolling the dough, she had cut and kneaded into small pieces, and making long ovals. Making the dough into long ovals begins to break the yeast down and gets it ready to roll into long strips. On the right are some of the raw taralli.

The most I could do during this portion of the process was admit that I could never roll out perfectly even strips; keep them company and take pictures. However, I could certainly do the next two steps – boil the taralli and then bake them.

The raw taralli get dropped into a pan of boiling water and removed once they float to the surface. Boiling the dough gives the baked taralli their shiny surface.

The boiled taralli are then put onto the oven rack and baked until golden brown. In my mother’s electric oven, because the heating coil is on the bottom, the taralli need to be flipped when the one side is golden brown. We made close to 75 taralli.