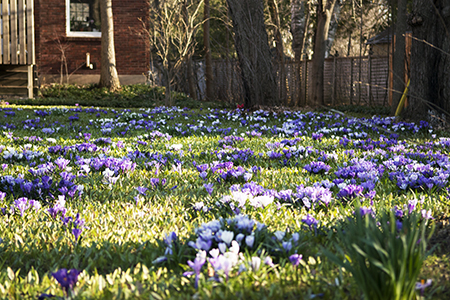 I was in the East-end, where the better people live, driving down Queen Street, when I glanced this front-yard full of crocus. Had never seen so many naturalized crocus and totally unexpected up here in the northern latitudes.

I find a place to turn around and head back. There’s no parking on Queen, so I turn right and pull up in front of a 1970s bungalow on fancy Lake Street. There’s an older guy sitting on his crowded front-porch behind his painted wrought-iron railing which some West-end immigrant crafted and installed. (Why do men’s chests and abdomens, as we age, look like barrels when we sit?)

It’s a short walk across the street, to the yard covered with crocus. And in my head, I script the following monologue for the East-end home-owner who eyed me as I got out of my dad’s van:

who’s this person parking in front of my house
he doesn’t look like one of us and look at that old rusted van
must be one of them dark-skinned EYE-talian from the West-end
doesn’t he know his kind aren’t welcome in this end of town
bad enough them other people took over the university down the road
we need to take back our province from them EYE-talians and them Injuns
Dough Ford is my man; he’ll make Ontario strong again.