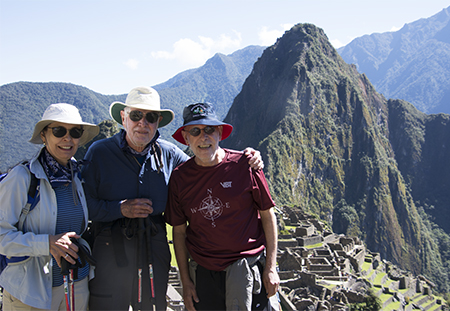 the ruins from afar

Ann, Don and I opted to not do the 6-hour hike, following the Inca Trail up Machu Picchu mountain. Instead we went up to the ruins on the shuttle bus. (Sergio, one of our guides, came with us.) We walked the Inca Trail from the ruins up to the Sun Gate.

The image is somewhat deceptive, because the ruins are quite far away from where Sergio took the shot. We are standing on a small plateau south of the ruins. (The small plateau is part of Machu Picchu Mountain.) From this distance, the ruins, the smaller mountain look like a set; it’s hard to get a sense of the size of the settlement, the size of the various structures from this far away. But as a backdrop the whole thing is amazing, right?

The peak behind us was at one time part of Machu Picchu Mountain. The earthquake that split the mountain left an area in-between relatively workable and it’s on this in-between outcrop that the Incas build the settlement.

Also, at the top of the peak, behind us, is an Inca observation station that can be reached from steps along the side of the mountain. Jorge, our other guide, said that when he was a teenager, the rage among he and his friends was to see who could reach the observation station in the shortest time. He made it up the mountain in 16 minutes. However, it became such a draw that people began to do very risky and dangerous antics to get to the top. The Government now restricts access to the peak and you have to make an appointment and be approved to go up. You also have to sign all sorts of waivers promising to not hold the Government liable for any harm that comes to you while making the steep climb.