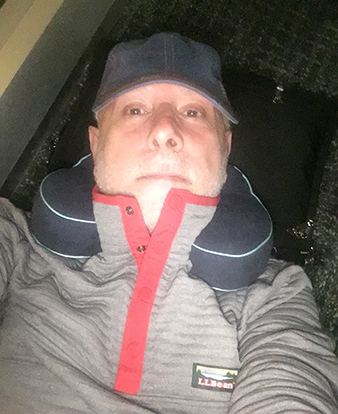 This morning, American Airlines called Frank’s cell to suggest that we take their 1:00 flight, because the later flight, we were scheduled on, would probably not be flying out – mechanical problems. So, we got it together and headed to Pearson by 10:30.

It’s now 6:00 pm, we’re in the Miami Airport and our flight to Lima doesn’t leave for another 7 hours.

The airport is a sprawling complex and we put in almost a mile walking from the domestic gate where we landed to the international terminal. And the international concord is a Spanish speaking area. Miami is an eastern gateway to Central and South America.

I always bring my phone and tablet charges with me, but it never occurred to me to also have my laptop charger and do some work while I’m waiting for a flight. (I’m just getting used to having WI-FI access at airports.) This is the first post, I wrote at an airport. (Frank is sitting across from me grading papers for his online course-work.)

I couldn’t sit in the uncomfortable chairs any more and just laid down on the floor. That’s the image on the right.

A side note: Our Miami/Lima flight got posted on the Departures board as delayed an hour. When I went up to the gate-agent to ask, she told me that the flight was on-time and that I should just ignore the board. The agent made an announcement about the on-time departure, but only in Spanish. (The Departure board was never corrected.)