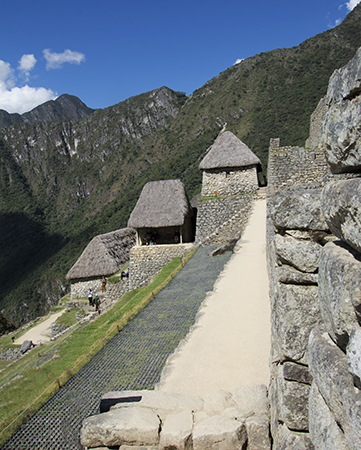 how do you write about extraordinary

Yesterday, seeing the ruins from the southern plateau did not prepare me for the experience of walking into the settlement.

The ruins of Machu Picchu require a rethinking of South America.

For many in the US, with its English Empire legacy, South America is seen as less than. American culture still holds on to those British prejudices towards southern people, towards people who are not English speaking, towards people who have dark skin.

And yet in Mach Picchu we are presented with indisputable evidence of a great culture, a society of scientists, mathematicians and astronomers; scientists who were breeding plants and animals for high altitudes; mathematicians who were using zero; astronomers who tracked the sun and the moon and believed the earth was round. (The astronomers were looking at the heavens through small reflecting pools found throughout the ruins. They were looking at reflections and had to convert what they saw back to a non-reflection.) 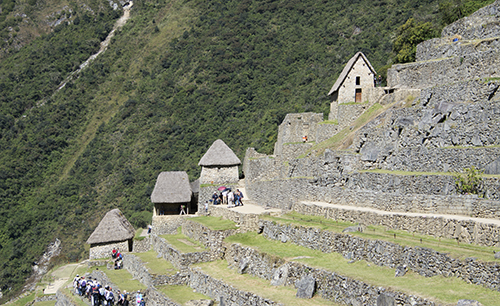 The ruins take their name from the mountain – Machu Picchu; no one knows what the Incas called the settlement, because there are no written accounts.

The Peruvian Government that manages the ruins, has roofed a number of the structures to show how they would have looked when people were living in the settlement. Both images are looking at the southern edge of the ruins; in the top pic I’m standing on the terrace directly in front of me. The bottom image, taken from the across the valley, shows the terraces that climb the side of the mountain.

In both images, I removed some of the people to give a better idea of the landscape and the ruins.