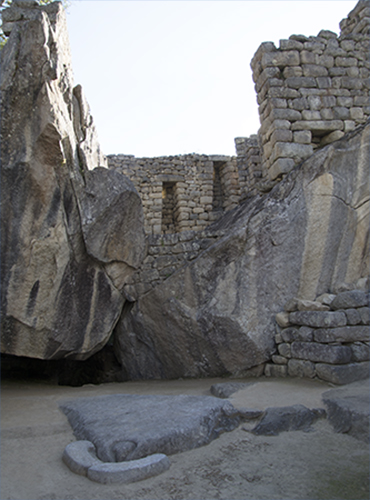 the temple of the condor

In Inca mythology, the condor ruled the sky, the puma the earth and the snake the underworld.

The Temple of the Condor at Machu Picchu is a very small space in the south-east section of the settlement. The space is dominated by a massive abstract representation of a condor, its outstretched wings carved onto pre-existing slabs of stone.

On the floor of the temple is a rock carved in the shape of the condor’s head and neck feathers, completing the figure of a three-dimensional bird. Historians speculate that the head of the condor was used as a sacrificial altar.

Under the temple is a small cave that originally contained a mummy. Also, there’s a prison complex directly behind the temple comprised of human-sized niches and an underground maze of dungeons. According to historical chronicles that documented similar Inca prison sites, an accused citizen would be shackled into the niches for up to 3 days to await deliberation. He could be put to death for such sins as laziness, lust, or theft.

Throughout the settlement we saw example of where the Inca incorporated pre-existing slabs, outcrops or boulders into walls, stairs, floors. In the Temple of the Condor, the use of two gigantic slabs to represent the condor’s outstretched wings was the most spectacular. 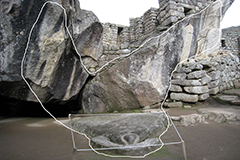 This was the last location we entered before we made our way out of the ruins. By then we were all tired and the place was emptying out, so my options for finding a location to shoot this massive abstract were limited. It was the one time I regretted not bringing a wide-angle lens. To shoot the pic and to get any semblance of the wings, I had to press flat against the outside temple wall.

(I found the image on the left online. It gives a better idea of the outline of the condor and the massive slabs that form its wings. The low rock-wall on the right is an entrance into the temple.)