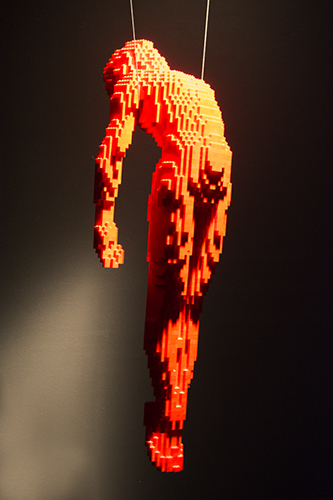 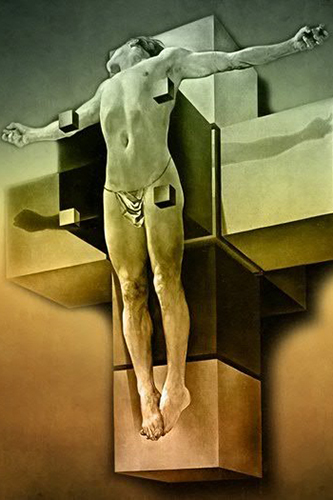 The Nathan Sawaya exhibit at the Carnegie Science Center is an unusual collection of pieces. I didn’t much like his rendering of famous sculptures, paintings or windows in Lego bricks. The Easter Island head worked best in plastic blocks; but The David, Caesar Augustus and Winged Victory were greatly reduced in size and looked amateurish rather than majestic. His original pieces, however, were very different and very interesting.

One of Sawaya’s original pieces – Hanging Man – reminded me of Dalí’s painting Corpus Hypercubus. Dalí’s geometry, his cubes, the lighting are all there in the way Hanging Man is rendered and exhibited.

BTW, the two images are the same width, height and resolution, and yet the image on the right looks wider. I think the outstretched arms fool the eye.

Also, the photographs Sawaya and Dean West collaborated on were great. The Lego sculptures – tree, towel, umbrella, dog, railroad tracks, dress – that were integrated into West’s photographs were part of the exhibit.