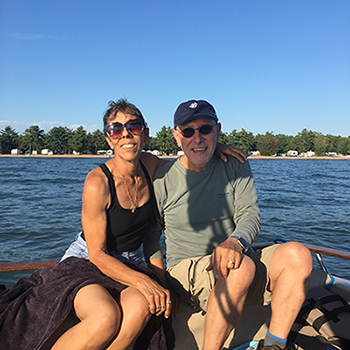 Connie’s friends – Carl and Terri-Lyn – invited us to go on a boat-ride down the St. Mary’s River. We began at the marina in downtown Sault Ste Marie and followed the river some 30 miles south and east to Lake George/Echo Bay.

What always amazes me about this area of Northern Ontario is the vast scale of the wilderness. Lake George is part of greater Lake Huron. And in the middle of Lake George and looking south you can totally forget you’re in the middle of the continent. There’s water all the way to the horizon. (the lake has an official name mainly because it’s such a large body of water and the surrounding islands, that cluster in this northern section of Lake Huron, almost create a seamless shoreline)

Carl anchored the boat in 3 feet of water and the three of them – Connie, Carl and Terri-Lyn – all jumped in; not me. The three of them marveled at the fact that it was mid-September and that they were still able to still jump into the water. (normally, by this time of year the temperatures and the water is too cold)

In the pic, Connie has just come out of the water. The camp-grounds behind us are on the Garden River reserve; in front of us is the vastness of Lake George.