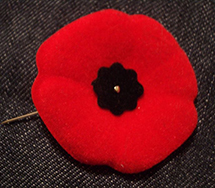 Here in Toronto, most people are walking around with a poppy pinned to their clothing. The red poppy, a native plant along much of the Western Front – a meandering line of trenches, stretching from the North Sea to the Swiss border with France – has been used since 1921 to commemorate military personnel who have died in the First World War. It was inspired by the poem In Flanders Fields.

The poem, written by Canadian physician Lieutenant-Colonel John McCrae, and the poppy are prominent Remembrance Day symbols in Canada, where In Flanders Fields is one of the best-known literary works. But the wearing of a symbolic poppy to commemorate The Great War is a British tradition that has been adopted by Canada, Australia and New Zealand – countries that were once part of the British Empire.

In Flanders fields the poppies blow
Between the crosses, row on row
. . .

We are the Dead. Short days ago
We lived, felt dawn, saw sunset glow,
Loved and were loved, and now we lie,
In Flanders fields. 1