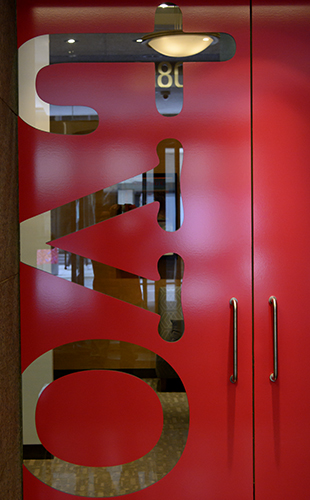 the promise of the new

I’ve been going with Frank to the offices of TV-Ontario – Independent Learning Center for years. He goes to pick up the exams of the students he tutors online. One of my favorite things in the lobby are the doors leading to the TV-Ontario offices. This is one of the many examples of modern design throughout Canada.

A couple years ago, I began researching a road-trip from Toronto to Halifax and each time I looked at online pics of cities like Oshawa, Montreal, Trois-Rivières, Moncton, I kept seeing modern housing, modern office buildings that looked like all the other housing and buildings throughout Ontario, Quebec and New Brunswick. (my sister reminds me that most of modern Canada was built in the 1970s and the 1980s)

Within this milieu is another characteristic of modern Canada an aversion to anything old. The last 50 years have see a rush away from the old downtowns, the abandoning of old housing; wholesale permission to rip down old buildings. The disdain of the old was balanced with an euphoria for new housing, new subdivisions. The immigrants that made Canada their home after the Second World War, wanted nothing to do with anything that looked old, that looked old-worldish. They wanted new bungalows, new appliances, new cars, new colors, new designs. They wanted the promise of the new.