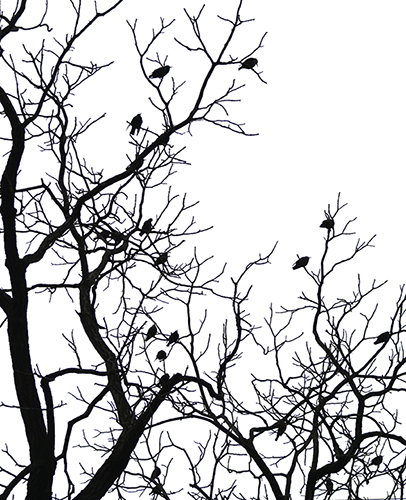 The image is of the trees – maclura pomifera – across the street. A more common name is Osage orange tree.

In 1804, Meriwether Lewis, of “Lewis and Clark Expedition” fame, sent cuttings of the plant back east. Supposedly, the descendants of those samples can still be found as far away as Philadelphia. As a result, although the trees are native to the southwestern United States, they have been used widely throughout the country, and have probably been in the region for nearly two centuries.

The tree bark can be used to make a yellow dye, and the Osage Indians — who introduced Lewis and Clark to the plant, and for whom the plant is named — valued the tree for its exceptionally strong, rot-resistant wood.

In the days before barbed wire, the trees were often planted in close-knit hedgerows — both to hem in the livestock and to mark property lines. It’s a “pretty tough tree,” says Masiuk, which has “potential for rugged, polluted areas.”

In fact, the Western Pennsylvania Conservancy’s guide The Trees of Pittsburgh notes that the trees were once used as hedges here. “The remains of such a planting can be seen on the south side of Dorchester Avenue in the Pittsburgh neighborhood of Brookline,” the guide notes. Located just off Penn Avenue near Frick Park, “Osage Lane in Point Breeze was once lined with these large trees,” though only a few small survivors remain. 1

This morning continued the dark-and-gloom that is early winter in Western Pennsylvania. As I was opening the shutters, I saw the birds in the trees and went out with my camera. All I did to the image was adjust the white level slider; this removed the gray and produced the white background.