the centurion and the magdalene

I’m on Woodward Avenue, in Royal Oak, Michigan, at the Basilica of the Little Flower. (Man, I could spout snark about Catholics, Art Deco and Detroit, but …)

Art Deco is one of my all time favorite visual-arts styles. (There’s a surprise – Zinga, clean geometric lines, symmetry, stylized bodies, handsome curves …) And, the Basilica built in the thirties, in the Art Deco style, is adorned with warrior angels, super-sized men and mournful women; in the picture on the left, the two figures are among some of the most striking. 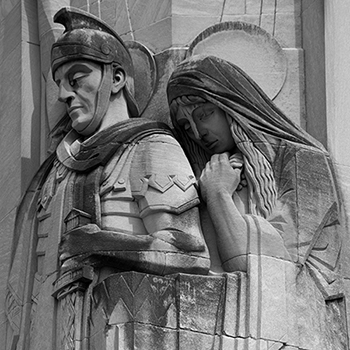 The bell-tower carvings depict the crucifixion; the Centurion and the Magdalene scale the right wall; John the Evangelist and Mary the Mother anchor the left face. (Earlier, I use the verb adorned, because the exterior walls of the church are yellow stone-block; only the bell-tower, the windows, the window frames and balustrades are decorative, carved limestone.)

In the image on the left, I don’t know what I like best – the Roman’s extravagant drapery, the toggle-button holding the cape closed, his helmet, the sword, the lance the centurion holds up to the Christ. (Art Deco may be French in origin, but it’s definitely masculine and phallic in its lines and trajectories.)

In this south-east corner of Michigan there are many Art Deco structures among the soulless suburbs that surround the once-great Motor City. I noticed the massive tower a couple of years ago when I was driving down Woodward towards I-696. But, it was on Google Maps that I found out it was a Catholic basilica dedicated to a very non-Michigan, non-American woman – Thérèse de Lisieu.

From the Basilica’s webpage – The church was first built in 1926 in a largely Protestant area. Two weeks after it opened, the Ku Klux Klan burned a cross in front of the church. The original wood structure was destroyed by a fire March 17, 1936. Construction of the new building started in 1931 and ended in 1936.

A dramatic limestone Art Deco tower called the Charity Crucifixion Tower, completed in 1931, features integrated figural sculptures by Rene Paul Chambellan, including a large figure of Christ on the cross, 28 feet high on the Woodward Avenue façade. It was built as a response to the Ku Klux Klan as a “cross they could not burn”. … At the upper corners of the tower are symbols of the Four Evangelists. … On the front are carved depictions the Archangels Jophiel, Raphael, Michael, Gabriel and Uriel. The pulpit is flanked by depictions of John the Apostle and the Virgin Mary to the left and a Roman Centurion holding a spear and Mary Magdalene on the right.

Slideshow – My Images of the Basilica