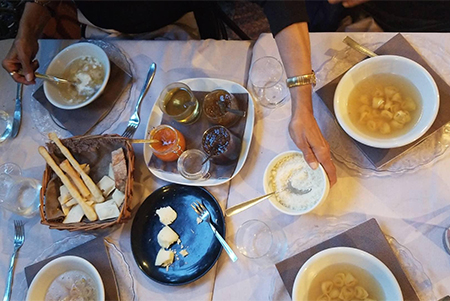 We’re at Restorante Alice on the edge of the University quarter. We ordered the buffet and by mistake added a tortelleni-al-brodo and a tagliatelli-a-ragu.

The buffet is what Ristorante Alice is know for. It’s a series of amazing delicious tapas – zucchini grilled in a balsamic reduction, eggplant wonderfully charred and drizzles with olive oil … but the all time favorite is the ricotta. It’s so creamy we were wiping the side of the bowl with our fingers and bread, because we weren’t going to let any of it go back. And the small bowls just kept coming. There was cured sausage, cherry tomatoes in olive oil, a sweet cabbage, grilled red and yellow peppers, mortadella. (Seane and I were trying to distract Christian from eating his creamy ricotta, but he wouldn’t cooperate.)

The last item of the buffet is fresh pecorino scooped with a spoon and served with 4 amazing toppings – pumpkin jam, fig jam, local honey and onion jam. The jams are made by the chef. (The very first time Rose, Derrick and I were at Ristorante Alice, the server brought us the pecorino wheel and a spoon stuck in the middle along with the jams. We didn’t know what to do. But we learned quickly.)

Reaching for the Parmigiano
We discovered that Connie loves her grated Parmigiano. She will literally move heaven-and-earth to get to the cheese. We first noticed in Orvieto when she told the server that he could leave the grated pecorino; he gave her such a look, but he left the cheese bowl. Our standing comment was that Connie like some brodo – broth – with her cheese. But let’s be clear, the emphasis was on the grated cheese.

At Alice we ordered two additional dishes – the tortellini and the tagliatelli – by the time they were served we were already bursting, but Connie was not going to pass up a pasta dish that allowed her to add grated cheese. In the above image, Connie is reaching for the cheese bowl.